Recipes worth Checking out from Bon Appetite and Gourmet March Issues 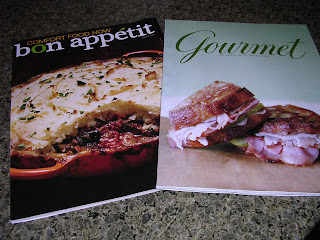 My association with Conde Naste magazines has left me with a number of treasured subscriptions. Two of them are Bon Appetite and Gourmet magazines. My mother in-law introduced me to Bon Appetite many years ago and I've been a fan ever since. Between the two of them I prefer Bon Appetite while my sister prefers Gourmet.

Clearly they have the same publisher and their formats are quite similar but they stress different things. Gourmet really loves to travel and explore flavors that are sometimes a bit too far fetched for my taste buds while Bon Appetite offers perhaps more familiar flavors and experiences. But they are both great and I always find things in them that I want to try. Whether I ever get around to actually doing so is another story all together.

So for those of you that aren't fortunate enough to get these magazines delivered to your door once a month I will provide a list of some of their more interesting looking recipes. The March issue of Bon Appetite came with comfort food on the cover. Always a good strategy. It is a Lamb and Eggplant Shepherds pie. I'm not a big eggplant fan though.

One of my favorite sections in the magazine is the part where readers write to BA about a meal they had at a restaurant and then BA tries to get the recipe and then prints it for them. This week a recipe from Tracht's in Long Beach, CA. caught my eye - Short Rib Sandwiches with Creamy Horseradish Sauce. BA makes a point of saying that the Sherry Braised Short Ribs are fantastic on their own and I'm definitely willing to test that.

Also since I'm always looking for delicious vegetarian recipes these two recipes caught my eye - Baked Brie with Mushrooms and Thyme and Mashed-Potato Casserole with Smoked Gouda and Bacon(take out the bacon for veggie). I think either of these appetizer and side dish could work as a main course for two people. We have a tiny place in the Methow Valley and I'm thinking I'll try the Baked Brie recipe when the morels are here. There is also a dessert in BA's March issue that I believe I'll be re-visiting in the fall - Caramel - Apple Crisp.

Gourmet's March issue cover displays a fantastic looking - Monte Cubano! I'm currently on a kind of Cuban sandwich kick so they grabbed me with this one. They make it easy by using sliced deli meets and then an easy egg dip. The sandwiches are then pan friend until golden brown and melty. Okay, that sounds good! Doesn't look particularly low-cal though so it will have to be a special occasion sandwich.

Gourmet also spent some time with the perfect roasting of a chicken. I took an interest in this because just two weeks ago my incredibly talented sister prepared for us the best roast chicken any of us had ever had. Her technique and Gourmet's are basically identical. Cook at high heat for about an hour and baste. I've got an organic, whole chicken in the freezer that I'm trying to keep my hands off of until Sunday where I'll give this technique a try.

The other recipe that I can't wait to try is one of their easiest and simplest - Panfried Smashed Potatoes. I'm always looking for a new way to present a potato and this one looks terrific. Using red potatoes cooked until tender they are placed on a baking sheet and lightly crushed with a potato masher. Leaving the potatoes relatively in one piece they are then cooked in a skillet of hot oil until they're golden brown. They're served with a sprinkle of Parmigiano - Reggiano and lots of pepper. What a great way to serve up a simple side dish.

Any of these recipes can be found at their website at epicurious.com. I suggest you check it out or go to your nearest magazine stand and buy a copy. After all the pictures are half the fun and you'll be doing our economy a favor.
Posted by Jenifer@SkookumsLog at 12:16 PM No comments: 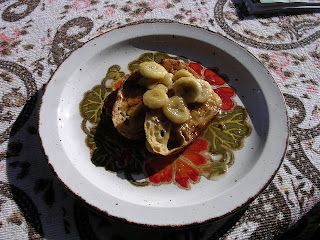 I was recently watching an episode of Diners, Drive-Ins, and Dives where they mentioned but did not prepare a breakfast of Bananas Foster French Toast. I've always had a fondness for Bananas Foster, the dessert, so this sounded pretty good to me. I didn't look up a recipe but just whipped up something that fit the description last weekend and it turned out deliciously.

Now I will offer a caveat on this recipe and that is that I rarely use bananas in anything anymore. If you've read anything about the banana industry you will feel the same - unless, of course, you have no conscience. Slave wages and terrible working conditions are just a part of the problem. The amount of fuel engaged in bringing these modern bananas from Central America to a grocery store near you is astronomical. There is also the fact that we've created a sterile banana (the Cavendish), and halted it's evolutionary growth allowing it to become less and less resistant to disease. Already it is being attacked by a soil fungus that makes the banana the most pesticide sprayed fruit on the market. Women working in the packing houses in Central American have double the average rate of leukemia and birth defects, while the men in fields suffer from sterility because of the pesticide. These problems may correct themselves if the modern banana goes extinct which is a very real possibility.

Okay, so now we can talk about this recipe. I found small, green, organic, and Mexican bananas at Trader Joes thus allowing myself to feel better about the whole banana thing. I tried to keep the calories down by reducing the amount of butter, etc. The recipe is for a breakfast for two.

Preheat oven to 250. Mix egg, milk, and nutmeg in pie plate. Place bread slices in mixture until thoroughly soaked. Cook bread in butter in frying pan until golden brown on both sides. Place french toast in oven to stay warm.

I just finished reading "Hometown Appetites: The Story of Clementine Paddleford, the Forgotten Food Writer Who Chronicled How America Ate" by Kelly Alexander and Cynthia Harris. The story started as an article for Saveur magazine with the same title and won a James Beard award for journalism. This along with the encouragement of friends and colleagues are what motivated Alexander and Harris to turn the article into a book.

Alexander had been a food writer for many years and was a highly placed Editor at Saveur. Harris on the other hand was a Kansas State archivist who had spent many thankless months going through Clementine Paddleford's extensive papers that had been rotting at the Dept. of Special Collections at Kansas State University. Between the two of them they manage to bring back to life this amazing, and trailblazing food writer.

Paddleford wrote for the New York Herald as food editor from 1936 to 1966. She was best known though for her weekly column in This Week magazine which was a Sunday supplement that was distributed all over the country. Her national exposure gained her fame and allowed her to travel the country as a well-respected food writer. Clementine was a bold traveller and that included visiting a nuclear submarine where she reported on what the sailors ate on the USS Shipjack. I'd like to see Rachel Ray do that!

I enjoyed the early chapters of the book where Alexander and Harris write about her childhood with her Mother Jennie. If you are like me then you will find a lot to admire in Jennie Paddleford's world. A great anecdote in the book recalls how her father insisted on building the hog run within eye shot of their big front porch. Unable to dissuade him Jennie proceeds to dig up sod, turn soil, and plant an enormous hedge of lilacs between her porch and the hogs. She then says to Clementine; "Never grow a wishbone, daughter, where your backbone ought to be." Now those are some words to live by. In memory of Clementine and her Mother Jennie here is one of Jennie's favorite recipes.

Sift together flour, baking powder, nutmeg, salt, and 1/2 cup of the sugar into a large bowl. Combine with the 1/2 cup butter in the bowl of a food processor and pulse until the mixture resembles coarse meal with lumps the size of small peas. Transfer dough to bowl. Make a well and add to it the egg and milk. Word dough very gently with fingertips or pastry spatula; knead until it just holds together, about 10 seconds. Dots of butter should be visible; do not overwork dough. Generously flour work surface, then roll dough out to form two circles that are 1/2 inch thick and 8 to 10 inches in diameter. Wrap the disks tightly and chill.

Set aside 16 of the best looking berries. Hull the rest, then halve and place in a bowl with the remaining 1/2 cup sugar or more, depending on the sweetness and ripeness of the fruit. Let strawberries macerate for at least 15 minutes but no more than 45 minutes.

Remove dough disks from refrigerator. On 2 ungreased sheet pans, bake dough rounds 12 to 15 minutes, until golden on the outside and just cooked through in the center. Remove from oven and cool 10 to 15 minutes.

Slather the remaining 2 T of butter evenly on each disk. Transfer large disk to a plate that will accommodate it and the juicy berries running off it. Pile macerated berries on top and then cover with the other disk. Garnish with reserved whole berries and serve with whipped cream if desired. Yield: 8 servings.
Posted by Jenifer@SkookumsLog at 2:49 PM 1 comment: 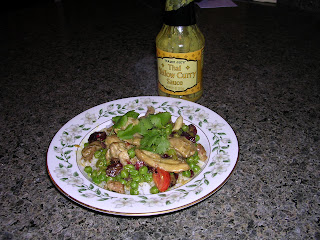 My husband and I don't have a lot of options when it comes to dining out near our cabin in Twisp, WA. In the past few years the place to be has been the Twisp River Pub. They always have live entertainment on the weekends and they are very involved in the community. Their food, on the other hand, has always been average at best.

The past couple of times we have eaten there my better half has ordered the vegetable curry. He thinks it's the tastiest item on their menu. I can't agree with him about that because it is full of zucchini and I can't stand that particular squash. But as I was perusing the shelves at my Issaquah Trader Joes the other day I spotted their Thai Yellow Curry Sauce and grabbed a bottle.

I cooked it for dinner last night and I can report that it is delicious. I used what I had available in my pantry and refrigerator and the resulting curry couldn't have been tastier. I used some pretty interesting food in my curry. I love raisins in curry but all I had was dried cranberries. I chucked them in their anyway. They worked perfectly. I'll put my recipe down but feel free to improvise with your own ingredients.

Mix first four ingredients until chicken is covered with spices. Heat olive oil in skillet on medium to high heat. Add chicken in batches for a quick sear that adds good color but leaves them tender. When chicken is done reduce heat to medium low and add entire bottle of sauce to chicken along with the raisins. Cook until chicken is heated through, about 5 to 7 minutes, and then add tomato and peas and cook for another 3 to 4 minutes until done. Serve curry over jasmine rice and adorn with cilantro leaves. Serve to appreciative audience.
Posted by Jenifer@SkookumsLog at 3:07 PM 2 comments: