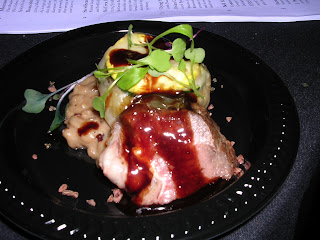 Last nights first ever American Lamb Jam in Seattle looked like a big success. The event was sold out well in advance and brought participants from across the state. If yesterday afternoons festivities were any indication then the sponsors will probably go for a repeat performance next year.

Chef Thierry Rautureau of Rover's in Seattle emceed and he added ebullience, class, and knowledge to the affair. His well-known hat drifted among the booths while sampling the wares and chatting up the locals. He caught my sister and I early before we'd tried everything but I stand by our selections of Barolo Ristorante and Andaluca as our two favorite lamb bites of the evening.

The People's Choice went to the Steelhead Diner at Pike Place market with their Braised Lamb Shanks with Balsamic-Mission Fig Conserva and Truffled Hominy Polenta. It was the second thing that we tried after we came in so we knew we were in for a special evening of food. It was so good that I ate it before I could take its picture. Sorry readers.

Let me also add that even though I wasn't sure about the pairing with the Steelhead's lamb the McCrea Cellars, 2004 Syrah, Cuvee Orleans from Yakima Valley was fantastic. The description provided by the winery expressed the unique flavor palate very well. "It's deep and angular on the palate, the black fig accented by a savory earthiness, and a texture that's full but not heavy."

The judges choice of the evening for best lamb loin dish went to the Barking Frog in Woodinville for their delicious Sous Vide Superior Farms Lamb Loin, Coffee and Cocoa Nib Farro Rissoto (my sister adored this), Fall squash Crepinette, and Balsamic Glazed onions. A very impressive plate that received plenty of oohs and ahs from the crowds as well as the judges. Its tasty loveliness is pictured above.

My choice, as told to Chef Rautureau, of Barolo Ristorante was not far off as the judges chose them as runner up in the lamb shank division. I thought their bite was the most melt in your mouth taste of the whole evening. Their lamb was pull apart tender and they served it with a perfectly cooked butternut squash gnocchi served hot from the pan. Really a feat considering the number of people they were serving...400!

The judges didn't choose to make Andaluca a winner for the evening but I thought they had a very tasty offering. Their division was leg of lamb and they created the dish in a "osso bucco style." The perfectly flavored lamb was served on a crostini and paired nicely with its wine, a 2007 Tempranillo from Yakima Valley.

Pictured Below:
08 Seafood Grill had Miso-Marinated Lamb Loin with Edamame Hummus, and Mint Gooseberry Coulis. The coulis was a taste sensation and I thought it was the best thing on the plate. Below that we have an offering from Chef Jay Bartelson at the Bell Harbor Conference Center. They are George O'Malley's Guinness & Jameson Braised Lamb Shank Cabbage Rolls. Not bad. 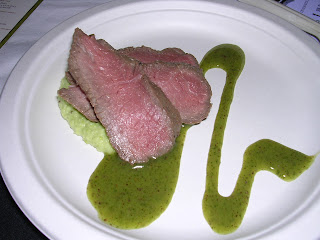 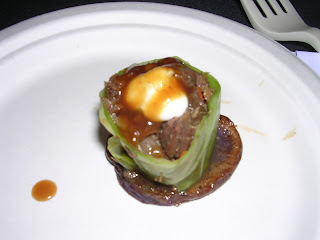 Posted by Jenifer@SkookumsLog at 1:46 PM No comments: