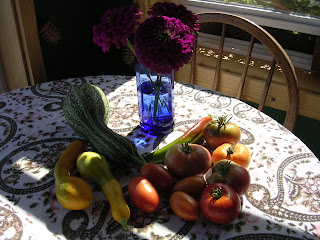 Just when I think that I might be going a little overboard worrying about the food we're eating in the United States, something comes up to remind me why I should be paranoid. In another piece of good reporting the New York Times has reported that Kraft, Safeway, Frito-Lay, and B&G foods have been taking bribes from a tomato food processor called SK Foods. According to federal prosecutors the bribes were offered in order to allow SK to sell them tomatoes so full of mold and other defects they would not pass federal tests. Not that we have any kind of inspection system or anything.

This is just another case of the "chickens coming home to roost." For the last decade the party in power didn't believe that business and industry needed to be regulated and so they didn't regulate them. Because as we all know the captains of industry are the most altruistic bunch you are every likely to meet and would no more endanger the American public then drink a martini without an olive, right?

They certainly proved that in the banking industry, unregulated they made a great deal of money for themselves, not so good for the rest of us though. And how can we forget the peanut recall where the product left the farm knowingly contaminated with salmonella and sickened hundreds? Peanuts that were so disgusting that our neighbors Canada refused them entry.

The problem is that inspecting food, airplanes, banks, etc. after the poo has hit the proverbial fan or somebody has died, is like closing the barn door after Elvis has left the building. People enjoy thinking that revelations such as the ammonia in the hamburger of McDonalds & Burger King is an unusual event when in fact basically our entire food industry is self-regulated! It is becoming increasingly evident that unless you know exactly where your food came from it is a total crap shoot.

I visited Krafts website to try and find out exactly how many tomato products they have but was unsuccessful because they have so many brands. But I did find that they consider themselves one of the most trusted names in the food industry. "We've put in place strong food safety and quality systems for our ingredients and our products."

Apparently some of their food brokers didn't get the memo because one of them was recently arrested at a New York airport. Allegedly Robert Watson, a food buyer for Kraft foods, found himself $20,000 short of a fully paid tax bill. So he called his buddy, a tomato broker in California, and asked him for the money. The broker was happy to help out although, being good businessmen, told him it would have to come out of his normal "commissions."

According to the New York Times these tainted shipments involved as many as 55 companies. "In some cases, companies detected problems and sent the product back - but in many cases, according to prosecutors, they did not, and the tainted ingredients wound up in food sold to consumers." That doesn't leave me feeling warm and fuzzy about the food industry.

The good news is we have access to farmers markets. The bad news is that Redmond Saturday market doesn't start until May. In the meantime, buy fresh and local as much as you can. At least you can see if your tomatoes are rotten.

Posted by Jenifer@SkookumsLog at 3:50 PM No comments:

A Valentines Day Breakfast that will melt your loved ones Heart 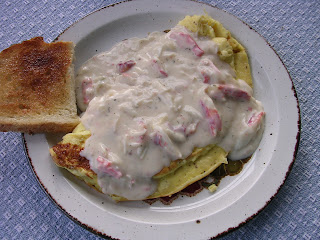 This Valentines Day lands on a Sunday. A day of sleeping in, reading the paper (if you still get one!), and enjoying a leisurely, late breakfast. The whole day just screams out for a delicious breakfast treat that will make your loved ones feel special.

Recently I wrote about a new cookbook of mine called Wildwood. It is named after a restaurant in Portland, Oregon of the same name. The book focuses on fresh local ingredients from the Pacific Northwest.

This Valentines Day breakfast recipe is inspired by this cookbook. The author and chefs version uses real cream, wine, asiago cheese, wild mushrooms & thyme and is served on a homemade brioche. But it is based on an original version that used a simple bechamel sauce.

I went for simplicity based on what was in my refrigerator at the time. But their is no reason that a cook couldn't modify this recipe using what he or she has in their refrigerator. The whole point is to make it a rich and one-of-a-kind delicious.

Melt butter in medium sized sauce pan. Add flour, salt & pepper and mix to create a roux. Slowly add milk at medium heat to roux stirring continuously. As mixture thickens and begins to come to a boil, remove from heat and add cheese. Stir until completely melted and then add crab and herbs. Stir and set aside.

Place omelet on platter and pour creamed crab over the top. Serve with toast, mimosas and a valentines day card! Enjoy.

Posted by Jenifer@SkookumsLog at 10:22 AM No comments: 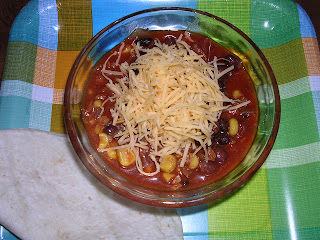 There are only 4 more days until Super Bowl Sunday and mouths are already beginning to water. If you live in New Orleans or Indianapolis then you will be excused from thinking of things other than "what the heck are we going to eat?" But for the rest of us it is the most burning question, right in front of "what kind of commercials are they going to have this year?"

If you're lucky then you have probably seen some pretty incredible Super Bowl Sunday spreads before. Whether it be a from-one-end-of-the-table-to-the-other cornucopia of every salty snack ever dreamed of by Frito Lay or a gourmands dream of stuffed lobster tail and caviar, it is always something to look forward to. Both of those options have their guilty appeal but one of them is as easy as opening a bag while the other will keep you busy all day.

Personally, I'd rather watch the game and the commercials then be in the kitchen the whole time. It's not fun slaving over a stove while people are cheering, screaming, etc. in the other room. Unless you are the paid caterer your place is with the rest of the party.

To that end I'll be offering some delicious but simple ways to enjoy Super Bowl Sunday without spending the whole time over a hot stove or opening a bag of chips. This quick, easy and tasty chili recipe will do the trick quite nicely. It has multiple qualities that make it a good choice for a football treat:

2 T Cumin (Taste your chili here because the chorizo is very spicy. You can add or subtract additional spices according to your own tastes.)

Add vegetable oil to large pan over medium-high heat. Throw in chopped onion and squeeze in chorizo. Break up chorizo while stirring and cook until onion is softened. Add all other ingredients. Stir and cook over low heat for 30 minutes. You can prepare in advance and store in the refrigerator until game time. Heat thoroughly on stove before serving.

Posted by Jenifer@SkookumsLog at 7:21 PM No comments: 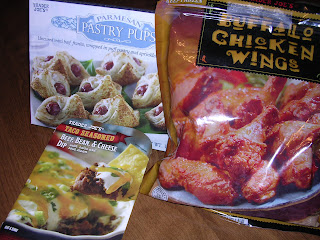 Keeping things simple when you are having guests is what it is all about. Unless you have hidden powers it is terribly difficult to mix with your friends while your head is buried in a bowl of pasta. Not being born an "Incredible" I am not capable of that trick.

I also happen to be a football fan and really would like to watch the Saints vs Colts match-up. As a Seahawk fan this year it will be a relief to watch football players who have some general competency and skill. The Saints/Vikings game was terrific and, even though I'm not a Brett Favre fan, the commentators and cameramen were not able to drive me away.

So given all these facts I have decided to punt in the kitchen this Sunday. I could not resist all the tasty treats at offer at Trader Joes and decided to avail myself of them. I have certainly used them before when having a party so this would not be unheard of.

(A visit to Costco today made me glad I had already completed my SBS shopping. They had so much to offer and taste in the snack food realm that customers were gaining weight in the aisles. I probably wouldn't have been able to resist and bought 10 times as much as I needed. Whooooooo).

My menu this year will consist of some homemade things accompanied by some Trader Joe things; a nice mix. Yesterday I posted my Chorizo Chili recipe and everything else on the menu is pretty self-explanatory. I have not been able to find mini-burger buns anywhere so I just bought hot dog buns and plan on cutting them down to size.

Lamb sliders with Bacon Jam (jam is from www.skilletstreetfood.com & lamb is from Thundering Hooves)

Assorted Beverages (As the Dude would say "Careful man, there's a beverage here!")

Posted by Jenifer@SkookumsLog at 7:15 PM No comments: