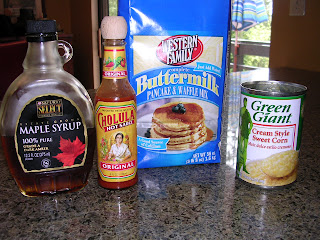 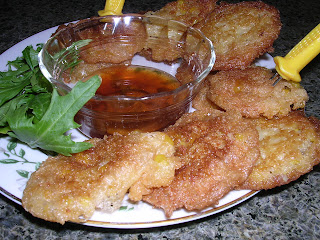 I love corn fritters. It is an appreciation that I developed later in life because my Mother never cooked them. I believe the first time I had corn fritters was in my Home Economics class in High School. They were easy and delicious. The only other thing that I recall about them was that we made them with creamed corn.

My next experience with the golden fritter was at the Western Washington State Fair in Puyallup, Washington. As with any great State Fair the food is plentiful, delicious, and not very good for you in general. As we wandered among the delightfully aromatic booths we ran into a line that put all the others to shame. It was a booth for deep fried Twinkies and Snickers Bars. Next door was a much quieter stall advertising fried vegetables including corn fritters served with strawberry butter.

For my husband and I the choice was a no brainer....we went for the corn fritters. The service was fast and friendly, the fritters were hot, and the match with the strawberry butter was inspired. We made a note to return the next time the yearly fair came along. We missed the year after so it was 2 years later before we were able to return. It's true that sometimes you can't go back. The service was extraordinarily slow and rude, the fritters were greasy dough balls, and the strawberry butter couldn't save them.

Since that time I've tried a couple of recipes and they always turned out doughy and not terrific. It occurred to me that what was really needed in a corn fritter was lightness and crispness. Since many of the recipes that I looked at called for pancake or baking mix I thought of the experiment the other half and I had with pancake mix a couple of years ago at our cabin in Twisp.

We've always been life long Bisquick users and I've had a bias against pancake mix that only uses water after one bad experience. Guests had left us the remains of a box of Western Family Buttermilk Pancake mix they had brought and used. Since our Bisquick was almost gone I prepared half the pancakes with Bisquick and the other half with the Western Family. Without telling my husband which was which I asked him what pancake he preferred. To my amazement he pointed to the Western Family product. A couple of bites later, I heartily agreed with him. The Western Family was so much lighter and active. After mixing it with the water and then barely incorporating the two ingredients you can just watch it grow and puff up with air.

This, I realized, was just the type of pancake mix a good fritter should be made of. Light and airy. So today I put it to the test and it was a smashing success. I added some of my own flavor embellishments but left it as simple as possible. I will offer one warning though; you will be in danger of eating the whole batch yourself.

Heat vegetable oil to about 365 degrees in cast iron skillet about 2 inches deep. Pour creamed corn into medium size bowl, add pancake mix and then water. Mix until incorporated but not over mixed. Batter should be the consistency of pancake batter that can be poured from a ladle into the hot oil. Add salt and cayenne pepper. Drop enough batter in oil to create a fritter about the size of a cookie. Cook only 4 to 5 at a time so oil doesn't cool down significantly. Cook fritters until dark golden brown turning once in the process. Cool on paper towels and then serve with spicy syrup. Yummmmmm.