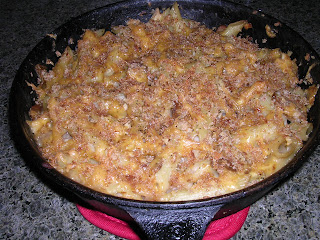 It seems like these days I want to be frugal in everything I do. From shopping, to energy, to waste management, to cooking, I look for ways to save. Even if it does nothing more than save my husband some extra dishes to put in the dishwasher I go ahead and do it. In these hard times it appears that is has become a part of my DNA.

A few years ago I ran into a recipe for Tuna Noodle Casserole in Bon Appetite. Interestingly enough it had been adapted by food editor Kemp Miles Minifie from her mother's recipe. Her mother, Betty Blood Miles, used cream of mushroom soup in the 1950's as everyone else did to make her 4 kids a tasty dish they all loved within their budget. But Kemp figured out how to make it minus the processed food products.

The first time I made it I was confronted with the recipes multiple steps and time consuming production. I was also met with one of the most delicious tuna casserole's that has ever crossed my rosy lips. It was good enough that I've made it a couple of times since but the amount of work required kept it from being a regular on our table. Now that I'm jobless in Seattle I have the time and with a severely reduced income tuna has become a popular option again.

I adapted the tuna noodle casserole again on Monday night in order to cut the recipe in half, reduce the caloric content, and limit the number of pans and steps required. The result was delicious and impossible to tell apart from Kemp's first adaptation. I recommend that you use line caught white albacore canned tuna for your recipe because it is more sustainable than other tuna.

Preheat oven to 375 degrees. Cook onion in a Tablespoon of butter in medium cast iron skillet until softened. Add mushrooms and saute until heated through. Add soy sauce and sherry and cook to mostly evaporated. Remove from heat. In another large pot cook your pasta. When pasta is done drain and add to cast iron with mushrooms and onion.

Melt remaining butter in pasta pan over moderately low heat and whisk in flour. When cooked add broth in a stream while continuously whisking and bring to a boil. Whisk in milk and continue simmering until white sauce is of a creamy consistency. Flake tuna into cast iron skillet and then pour sauce over whole mixture and stir together.

In small bowl toss together bread crumbs and cheese. Drizzle with olive oil and toss again. Sprinkle evenly over casserole and then place in oven. Bake for 20 t0 30 minutes until topping is crisp and sauce is bubbling. Yummmm!
Posted by Jenifer@SkookumsLog at 1:38 PM

I love love love tuna noodle casserole, but don't get too make it much because DR does not like it and won't eat it. So once in awhile I make it for my slef and freeze half of it. This recipe looks real good!!